Skip to content
Post Malone has enjoyed a meteoric rise in hip-hop at just the youthful age of 22. After inking a deal with Republic Records, the eccentric artist has blossomed into an industry superstar with just one studio album under his belt. Malone released his debut offering Stoney in late 2016, but gained notoriety with his viral single “White Iverson” back in February of 2015. 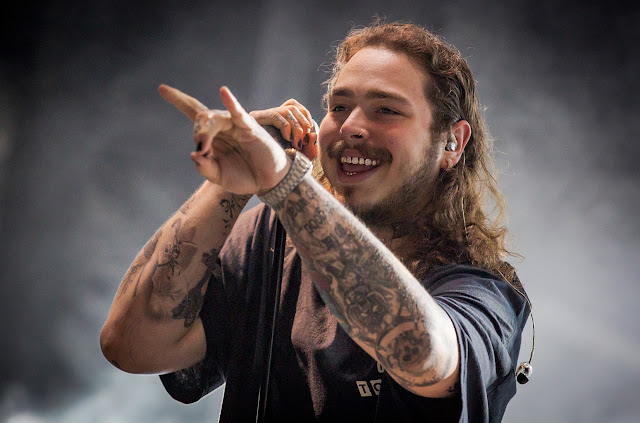 Even though it’s supremely early in the career of Malone and there’s still much to be figured out, let’s delve into the creative Guitar Hero-inspired artist’s discography to pinpoint his top ten tracks thus far.
10. Post Malone – “Go Flex”
Malone opens and closes the fiery James Defina and Chris Velona directed “Flex” visual in a peaceful place, finding himself playing an acoustic guitar in an abandoned warehouse. The wrestling fan even shouts out the legendary “Stone Cold” Steve Austin on the record with a proper tribute rapping, “And I’m stone cold with the flex/ With my squad and I’m smokin’ up a check.” Post details his ascension in hip-hop over the Rex Kudo, Charlie Handsome and FKi collaborative chord progressions and 808s.
9. Post Malone – “Fuck” Featuring Jeremih
Calling on the underrated Jeremih for the assist, the duo’s explicit collaboration gets right to the point on the opening hook as the Late Nights crooner says, “I ain’t here for no conversation/ I ain’t really tryna talk/Can a n—a be honest baby/I just came here to fuck.” Post Malone then hops in to confess his love to his woman closing out the FKi produced track with, “I could fuck you all the time/ Girl I’m glad you mine.” Hopefully, more collaborations between the pair of talented artists is on the horizon.
8. Post Malone – “I Fall Apart”
This is another dark Post Malone song and it may be his most vulnerable work. “I Fall Apart” details a crushing break-up Post experienced in years prior, even admitting to boozing in an attempt to numb the pain he felt. The Illangelo-produced song finds Post tapping into his emotional side on Stoney’s track No. 7. Fans definitely could relate to the vibe even though the unexpected theme took them by surprise.
7. Post Malone – “Hollywood Dreams”
This Post Malone song pays respect to the legendary band Fleetwood Mac by flipping their tuneful “Dreams,” as a sample for his own “Hollywood Dreams.” Post definitely made it work, as the August 26th fan-favorite really exemplifies the 22-year-old’s ability as a ranging artist. The dark piano-laden record sees Posty in a different mindset as he raps, “I thought that I would learn by now/ I thought that I would never come down / Just last night we was going so hard/ But now I can’t feel my heart/Let me down easy, don’t let me down rough.”
6. Post Malone – “Candy Paint”
Malone made a solo appearance on The Fate of the Furious soundtrack, which included top tier artists such as G-Eazy, Kehlani, Lil Uzi Vert, Travis Scott, Quavo and much more. When a movie brings in over a billion dollars at the box office, it’s never a bad idea to join forces with that. The Dallas Cowboys fan hinted that the bubbly “Candy Paint” could appear on his upcoming sophomore offering after re-releasing the Louis Bell-produced track as a single last week.
5. Post Malone – “Déjà Vu” Featuring Justin Bieber
Who would’ve thought Malone and Biebs would become pretty good friends? Post appeared on Justin’s Purpose World Tour as one of the openers and the duo actually developed a friendship before hopping on a record together. “Déjà Vu” opens in a gloomy place infested by a church organ before Post hops in and Bieber later joins him on the hook to the Stoney single. Malone told Genius the title made sense because, “You go around and you do so much, and you see so much. At some point, with the certain people that you meet, and the way that people act towards you, it’s kind of like redundant. It’s a crazy life that we live. We’re just trying to make out alive.”
4. Post Malone – “Money Made Me Do It” Featuring 2 Chainz
The Stoney artist calls on 2 Chainz, as both rappers pay homage to the late Bankroll Fresh on the soothing “Money Made Me Do It.” Malone actually sees a co-production credit for himself in addition to FKi on the record, which originally appeared on the 22-year-old’s mixtape August 26th. After fans’ reception to the track was positive, the luxurious confessional showed up as track 17 on the guitarist’s debut album. Malone raps, “Diamonds in my chain gold/ Every 20 minutes, change clothes/I had a mil before the label/ Just as long as they know, money made me do it.”
3. Post Malone – “Congratulations” Featuring Quavo
Metro Boomin’ enters the picture for additional production on the tuneful record and that very studio session embrace between Metro and Malone is actually recorded to be the introduction in the “Congratulations” visual. The feature savant Quavo hops in mid-record for the assist on the hook and delivers a verse of his own. The fifth single off Stoney was officially released last January, though Malone debuted the song while performing in his home state of Texas during September of 2016.
2. Post Malone – “Rockstar” Featuring 21 Savage
Hip-hop is the new rock ‘n’ roll, Malone teamed up with 21 Savage to collaborate and details the “Rockstar” lifestyle two millennials are enjoying due to their recent musical success. The braggadocios record premiered at number two on the Hot 100 before vaulting over Cardi B for the No. 1 spot on the latest chart (Oct. 28). “Rockstar” will be the lead single off of Malone’s upcoming album, Beerbongs & Bentleys. The Tank God and Louis Bell-produced track gives 21 and Post their first No.1 hit in their respective careers.
1. Post Malone – “White Iverson”
Originally, Malone wasn’t planning on releasing “White Iverson” until it leaked, which propelled him to step in the booth and would prove to be one of the best decisions he’s made in his young career. The Republic Records artist was an unknown in the industry prior to the ode to NBA legend Allen Iverson. The 2015 auto-tuned anthem’s visual currently boasts over 432 million views on YouTube and counting. Peaking at No. 14 on the Hot 100, Post’s ballin’ first hit showed up on his debut studio album, Stoney. Ride out to this Post Malone song above.
source: https://www.billboard.com/articles/columns/hip-hop/8013859/post-malone-songs-best-hits-list